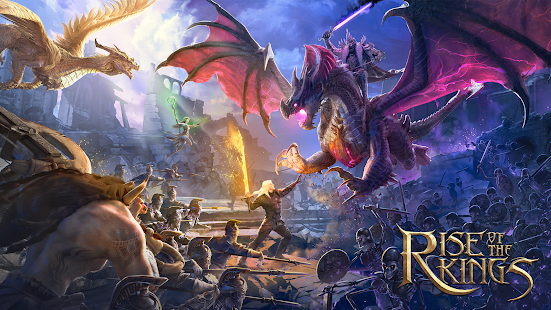 WHEN DARKNESS FALLS, HEROES RISE
A new war is upon us, with evil threatening both the innocent and the meek. Cries of agony ring out across the land, as various powerful factions fight for power and domination. The fate of this land now rests in your hands.

DARK FANTASY WAR
Traverse the many realms as you confront the full savagery and terror of the dark forces. Develop settlements, expand your territory, and build up your very own army to command. Monumental challenges await you!

SECURE YOUR REIGN
Wizards, elves, and knights. Curious creatures and terrifying beasts. You’ll have many allies as you journey through this land, enlist them to aid you in battle. Victory smiles on those who wield power and strategy equally well.

FORTIFY YOUR DOMAIN
Shrouded in darkness since time immemorial, these buildings patiently await their true master. Each building has its own unique and significant function, and your power will grow as your settlement does.

A DRACONIAN SHOWDOWN
Once again, the forces of light and darkness clash, threatening to destroy existence itself. Unimaginable power is at stake – to possess it, is to possess the world. Players from every corner of the world stand with you – join with them in this epic war now!

EXPAND ALLIANCE TERRITORY
Throughout the season, your power can be strengthened by joining an Alliance, expanding territory, collecting valuable resources, and defeating enemies. The experience and power that you gain through your conquests will help you overcome anything that stands in your way.

Anointed by fire, develop your Castle and forge an eternal empire.

Heroes have no fear. Are you ready to conquer and rule?

Keep in touch with Rise of the Kings and friends!
https://www.facebook.com/RiseoftheKings
[New Content]

3. Rewards from some events have been adjusted.