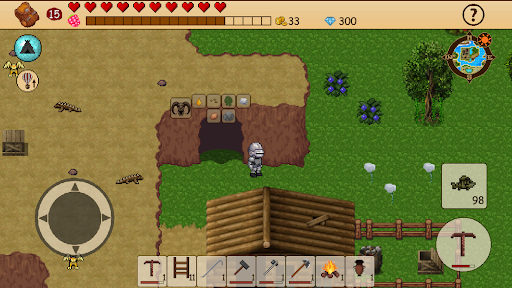 Warriors: Join the fight against monsters! Survival RPG: Open World is a free 2D pixel RPG game (Role Playing Games) set in a pixel fantasy retro style open world. Set in a medieval open world (castles, dungeons, temples), you can become a warrior and fight monsters (dragons, dinosaurs, sharks and others). From the retro 2D pixel world of the Survival RPG series, a new exploration, adventure and survival game begins! It can also be played offline.

In this game, create your own story: decide where to go and what to do. Your quest is to become a warrior, to survive, explore and fight monsters in this medieval open world. Build shelters, find food, explore dungeons and castles, craft armors and swords and mine precious metals. You can build your own house, farm and harvest food, craft a ship to conquer the ocean and fight sea monsters. Watch out for danger, fight monsters and hunt treasure chests along the way.

To explore and survive your epic quest :

– Plant trees to create you own forest, craft houses and decorate them as you please
– Discover hidden objects in caves, dungeons, medieval castles, temples
– Build shelters and campfires, farm and harvest food
– Craft bridges and tools to explore dungeons, islands, deserts, jungles, oceans
– Build a ship to conquer the ocean and fight sea monsters such as sharks
– Fight dragons, dinosaurs and other monsters
– Mine precious metals like gold and silver
– Craft different items with recipes that you will unlock during your quest, adventure and exploration
– Lots of warriors’ armors, weapons, swords and other gear to craft
– Several quests offered by RPG characters (NPC)
– 2D pixel RPG game
– Free offline retro game